A Storytelling Card Game About Saving The World With Lasers, Giant Robots, and Bureaucracy.

The first monster appeared five years ago. It rampaged across the country. The loss of life was catastrophic.

After hundreds of hours and millions of dollars spent, the leaders of the world considered the fallen body of the monster and said, “There must be a better, more awesome way of defending the world.”

This is how the Agency was established in the shadows at the edge of the law. It was set up with funding from major world governments, and with an Oversight Committee representing political and corporate interests to keep it in line. It was given a singular mission: defend humanity from monster incursion by whatever means necessary.

The Agency built the ultimate monster-fighting weapons: robots, standing ten storeys tall and armed with cutting edge weaponry, piloted by heroes drafted and trained to fight as humanity’s last and best hope. To develop and maintain the robots, a huge web of infrastructure, engineering, and administration was built to keep the Agency running in the face of increasingly dangerous monster attacks.

You are part of that support team, keeping the Agency ready to deploy a giant monster-killing machine at a moment’s notice. Most days it’s just office work. Forms, routine maintenance, and trust building exercises. But every few weeks the red light flashes and the alarm blares. A monster has been spotted.

Today is one of those days. The klaxons are blaring. Commanders are shouting orders. In mere hours, the monster will be on top of the city.

Everyone needs to do their part. It’s time to save the world.

Get In The Robot! is a storytelling card game for 2-4 players, utilising a standard deck of playing cards and a six-sided die. You will tell the story of a team of mid-level engineers, or accountants, or a human resources managers working for the Agency, the shadowy, para-military, government-sponsored, corporate-controlled last and best hope for humanity against the monster invasion.

Your download of Get In The Robot! includes a .pdf copy of the rules and card table to give meaning to a deck of playing cards.

You need a standard deck of playing cards, including Jokers and one six sided die (1d6).

In order to download this game you must purchase it at or above the minimum price of $7 USD. You will get access to the following files:

I'm reading this in order to play it soon and there's one thing that's not clear to me.  Do players draft more skill cards after using them?  On page two, the setting up says "Set aside the remaining cards within reach." but I can find no indication that the remaining cards are then used in the game?

Good clarification. No, players don't draw new cards, they have to manage their hands and decide when to act and when to leave events to chance.

Yes, setting aside the remaining cards within reach is redundant. I'll have to update that language on page 2.

I got this as part of the Indie bundle for Palestinian Aid. As someone who loved Shin Godzilla and Dai-Guard I'm so incredibly hyped to play this!

GET IN THE ROBOT by Mitchell Salmon is a GMless, card-based TTRPG. It is a game about mechas, but instead of playing the pilots, you and your friends play as the support team, working tirelessly to make sure the robot gets deployed to fight the kaiju.

Each character has three roles in the agency, as well as a quirk that makes things more interesting. A card is drawn to determine the obstacle that the team is facing, and the players have to overcome it with cards of the right suit. I love how each suit represents an area of skill, with Armoury, Engineering, Administration and Human Resources represented by club, spade, diamond and heart respectively.

The game is expertly layout with clear instructions, and the prompts are evocative. I have a feeling that it would lead to many great stories being told at the table. 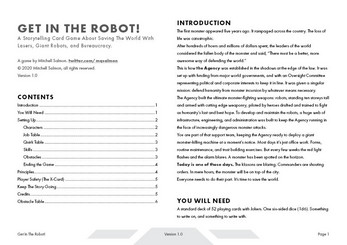 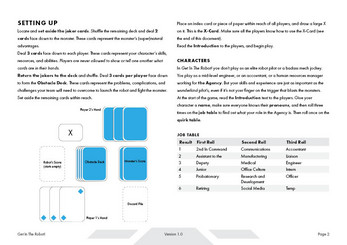 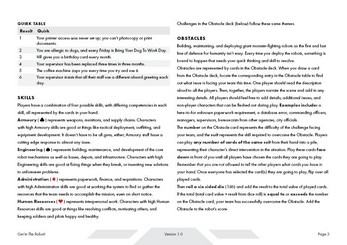 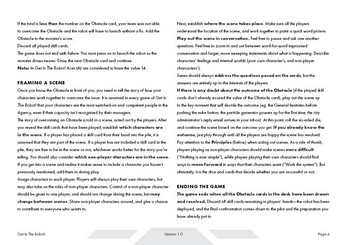 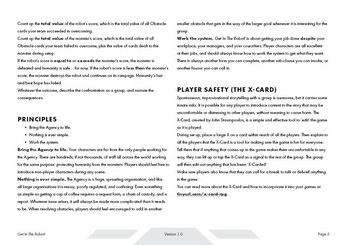 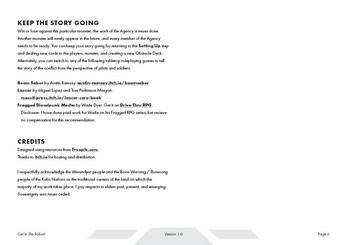