It’s a tough, unforgiving, dangerous galaxy. Out there on the fringes of solar systems controlled by interstellar ultra-capitalist corporations, where pirates and bandits and marauders roam, mercenaries make a living taking dangerous jobs for not enough pay, hoping to scrape enough together to buy a better gun that could be the difference between success and bloody, painful failure. And if they die, the ubiquitous corporate respawn industry spits them out in a new body, for as long as it’s profitable.

You are one of these bombastic, gun-toting, problem-solving, explosion-loving, daredevil-driving mercenaries, out to make a name for yourself blowing away bad guys for fun and profit. You do what the mission demands, and look good while doing it.

Shoot 'n' Loot is a rules-lite tabletop roleplaying game for 2-5 players, including a GM. It is built in the easy-to-learn, fiction-first style of games like Apocalypse World (D. Vincent Baker and Meguey Baker), Dungeon World (Sage LaTorra and Adam Koebel), and The Sprawl (Hamish Cameron). It uses a unique map-drawing approach to fast-paced, lightly tactical combat. It contains everything you need to jump straight into a setting-agnostic high octane world of explosions, bullets, and mayhem.

Shoot 'n' Loot is Powered by the Apocalypse. It uses a roll of 2d6 +/- a skill to resolve challenges, and each move has built in, fiction-focused prompts for failed rolls, partial successes, and complete successes. Each character has a Playbook which gives them access to moves unique to them. As you level up through completing missions, failing rolls, and complicating missions through personal drives, you choose new moves to expand your character's options.

Shoot 'n' Loot uses a new map-drawing approach to fiction-first tactical combat. It's not grid-based combat, nor is it purely theatre-of-the-mind.

"It's like The Quiet Year, but with more explosions."
—The Welcome to the Party team

Combat is fast and dangerous, but don't worry: when your character dies, they'll just come back at a nearby respawn station... to a point.

Characters wield an array of wild, randomly generated guns across 10 weapon types with 100 possible tags, and 100 possible looks. Some tags give concrete bonuses or penalties while some are part of the fiction.

Your download of Shoot 'n' Loot includes a full rulebook, rules for combat and weapon generation, and 6 playbooks.

You will need dice, paper, pens or drawing items, tokens for characters, tokens or diecast cars for vehicles.

Shoot 'n' Loot does not include any setting information, worldbuilding, or fiction. You can play games of Shoot 'n' Loot in any science fiction or cyberpunk setting that allows mercenaries to operate with total or partial impunity, features unimaginably large and powerful capitalist corporations, and has the kind of technology required to bring people back from the dead for profit. You can develop your own setting as you play, or port Shoot 'n' Loot into an existing world.

This game is licensed under a Creative Commons Attribution 4.0 International License. That means you are free to adapt, edit, and remix this game as long as you credit Mitchell Salmon. This license does not extend to the graphics and photos used, which remain the copyright of their respective owners.

The team from Welcome to the Party played Shoot 'n' Loot on stream. Check out how it went for them on YouTube.

Just downloaded this from the charity bundle! Haven't gotten a chance to play it but it looks amazing! It's definitely the kind of tabletop rpg I wish I could write and I'm already finding myself writing homebrew/house rules I might use in a future campaign. I'm especially amazed how you were able to emulate the mechanics of a cover shooter and games that fit into the genre of the game's namesake while still staying rules-lite.

Thanks so much! I'm so excited that you're homebrewing using it! 💛💛💛

No problem! I really hope the game gets the attention it deserves with so many people acquiring it through the bundle. I'm not too social media savvy but I was wondering if this game had one of those "communities" I've seen on this site or if there's anywhere else fans tend to gather like a discord server or maybe a subreddit where I could find other players or share what I've written.

No, I don't manage or know of any communities for my games. ☺️ But I reckon there are probably some general Powered By The Apocalypse (PbtA) homebrewing Subreddits and Discord servers out there where people would be talking hacks and original content for all sorts of games built on this framework.

SHOOT 'N' LOOT is a very fun PbtA game that emulates cover-based loot shooter video games, with interesting map-drawing mechanics. All the guns are generated with unique (and often quirky) properties. You may get a melancholy gun that requires constant encouragement, or a gun that shoots marshmallow. You have only three stats; Gun, Run and Mind. I love the simplicity, and that is pretty much all you need in a shooter game. The cover mechanics is fantastic; it encourages the player characters to move around the battlefield as their position becomes compromised, and you get to add new features on the map as a result. The playbooks consists of different video game protagonist/action hero archetypes, and the author has made great effort to make each of them stand out from each other with unique playbook moves. I absolutely adore the layout of this game; everything is neat and tidy, yet oozes out with style at the same time.

Reply
Games by Mitch2 years ago

Thanks for the review, Arthur! You're a gem!

Game I played online ended when we got the gun that can kill the past, but it only killed the last 5 minutes so we didn't get the gun but left with a ton of treasure and other guns.

Holy crap! That sounds amazing! So glad you had fun!

Gonna try this for my Nuclear Throne RPG needs. 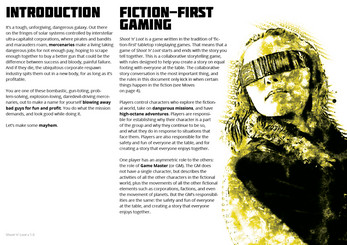 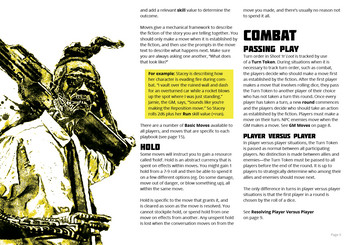 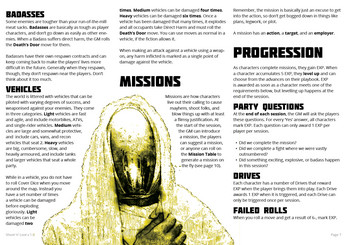 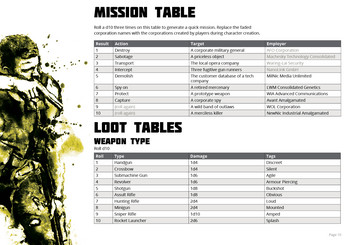 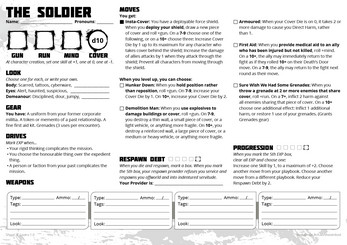